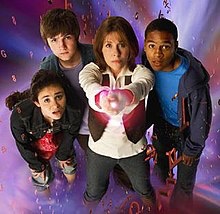 For those of you who keep up with my TV binging, I’ve started a new series. Well, more of a spinoff series.

My original plan was to watch the latest season of Doctor Who, but after discovering I had to pay per episode, I decided to take a hiatus for a bit.

I’m onto The Sarah Jane Adventures, following the shenanigans of one Miss Sarah Jane Smith, former companion to the Doctor, and company.

So far, it’s fun. It can tend toward the cheesy, but it can also be riveting and suspenseful.

Unfortunately, there were only 4 seasons due to the untimely passing of Elisabeth Sladen who played the lead character. Yet another reason to hate cancer.

Still, she was fantastic.