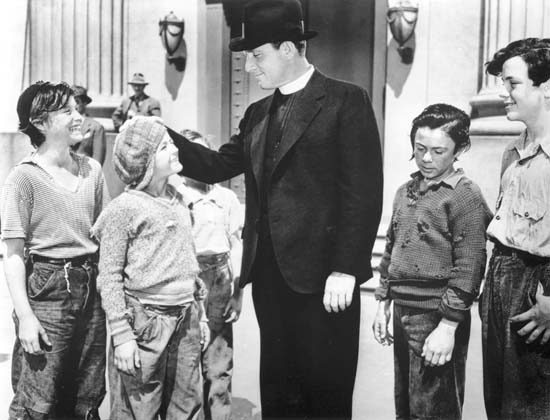 I saw Boys Town, a 1938 movie starring Spencer Tracy and Mickey Rooney. It was definitely a feel-good movie, though it didn’t start out that way. I believe it was based on the true story of the founding of Boys Town.

The point of the movie is that Father Flanagan was trying to help boys who didn’t have mothers or fathers to look after them, who would otherwise end up on the streets and involved in crime. He wanted them to learn how to live as decent citizens and decent human beings.

I think we sometimes are quick to judge those who act differently than we do. Or maybe whose sins are different than ours. It’s very easy to condemn someone who struggles with an addiction or issue that we don’t struggle with.

That’s what the Gospel really is. We like to harp on the sin part sometimes and maybe get a little too much satisfaction from telling people how bad they are, how they’re sinners headed straight to hell. Maybe we need to emphasize that it doesn’t have to be that way. Maybe we need to point out that God loved the world so much that He gave Jesus so that it wouldn’t have to be  that way.

Jesus didn’t come to tell good people how good they were. He didn’t come to make healthy people feel good about their health. He came for the bad, the messed up, the sick, the broken. Which by the way means all of us.

Before you write off someone else, remember who you used to be. Who you might still have been but for the grace of God. That just might make all the difference in the world. In that person’s world.

One thought on “Old Movies and Theology”